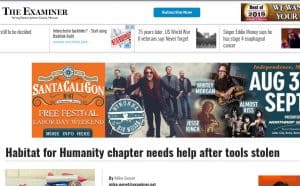 The Habitat chapter, based in Independence and serving much of Eastern Jackson County, is looking to replace most of its supply of power tools, which were stolen out of a trailer sometime last week at the group’s facility on Dodgion Street.

“We found out the day before Thanksgiving,” Truman Habitat President/CEO Christina Leakey said. “Our Wednesday crew is a group of retirees who come to build with us. They showed up for work and found all the power tools were missing out of one of two standard box construction trailers.”

Those wishing to donate toward replacing tools can visit www.trumanhabitat.org and click on the appropriate link.

Leakey said they are unsure when exactly the theft took place, as they didn’t have a build day the Tuesday before Thanksgiving. As of Tuesday, the group hadn’t compiled a complete inventory of the stolen tools, Leakey said, but the total value is at least $5,000, perhaps close to $10,000.

“We collect a lot of tools in various stages of use,” Leakey said.

There is an outside camera at the facility, but the theft wasn’t in the camera’s field of vision, Leakey said. The thief or thieves busted the trailer’s padlock and tellingly left behind ladders, paint brushes, nails and screws, and left the other trailer untouched.

“It was clear they took the most valuable tools, looking for the biggest return,” Leakey said. “They took the battery packs and chargers – they got everything that was required to run them.”